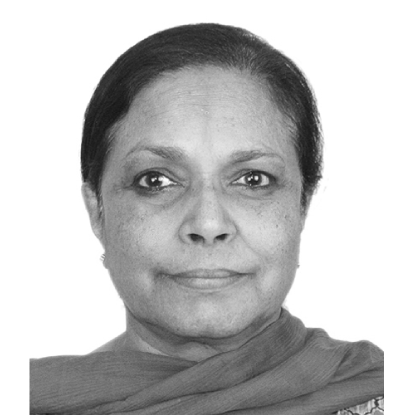 Ms Sujatha Rao is a former Union Secretary of the Ministry of Health and Family Welfare, Government of India. Of her 36 years’ service as a civil servant, she spent 20 years in the health sector at the state and federal levels.

Ms. Rao represented India in the Boards of the Global Fund for HIV/AIDS, TB and Malaria (GFATM); WHO and UNAIDS;  was a member of the 6 Member Global Advisory Panel of the Bill & Melinda Gates Foundation; Founding member of the Public Health Foundation of India; Member of the Advisory Board of the Ministerial Leadership Program of the  Harvard School of Public Health, Member of the High Level Panel on Global Risk Framework of the National Academy of Sciences, USA, Trustee of Population Council, USA etc. She also served on the board of BSNL.

Currently, Ms. Rao is member of the NHSRC, GOI, Board Member of PRITHVI Asset Reconstruction Company, and member on Boards of NGOs.  Among her other commitments, she is also Commissioner of the Lancet Citizens’ Commission on Reimagining India’s Health System – centred around introducing Universal Health Coverage.

An MA from Delhi University, an MPA from Harvard University, USA 1991-92, she was a Takemi Fellow at the Harvard School of Public Health 2001-2002 and Gro Harlem Brundtland Senior Leadership Fellow at HSPH in 2012. She is author of the book titled ‘Do We Care? India’s Health System’ – published by Oxford University Press, 2017 and has authored several articles in the media.